I must admit that when I started my Spartan Race adventure two years ago, I wasn’t that impressed. I believed that Joe De Sena was just your average “run of the mill” athlete who had stumbled upon an idea, and decided to turn a quick buck. I did a little research on him, and found that he had done some extreme stuff, but I still had a preconceived notion that he was probably just a schmuck. I mean, seriously, you had to sign a “death waiver” to run the event… Oooh scary! I am an Army Ranger with 19 years of active duty, a graduate of Ranger School (among others), and have served over 40 months in combat. To be fair, my anti-Joe and anti-Spartan Race attitude had manifested out of my own self-inflated ego. I think I really believed that few understood “HARD” like I did. 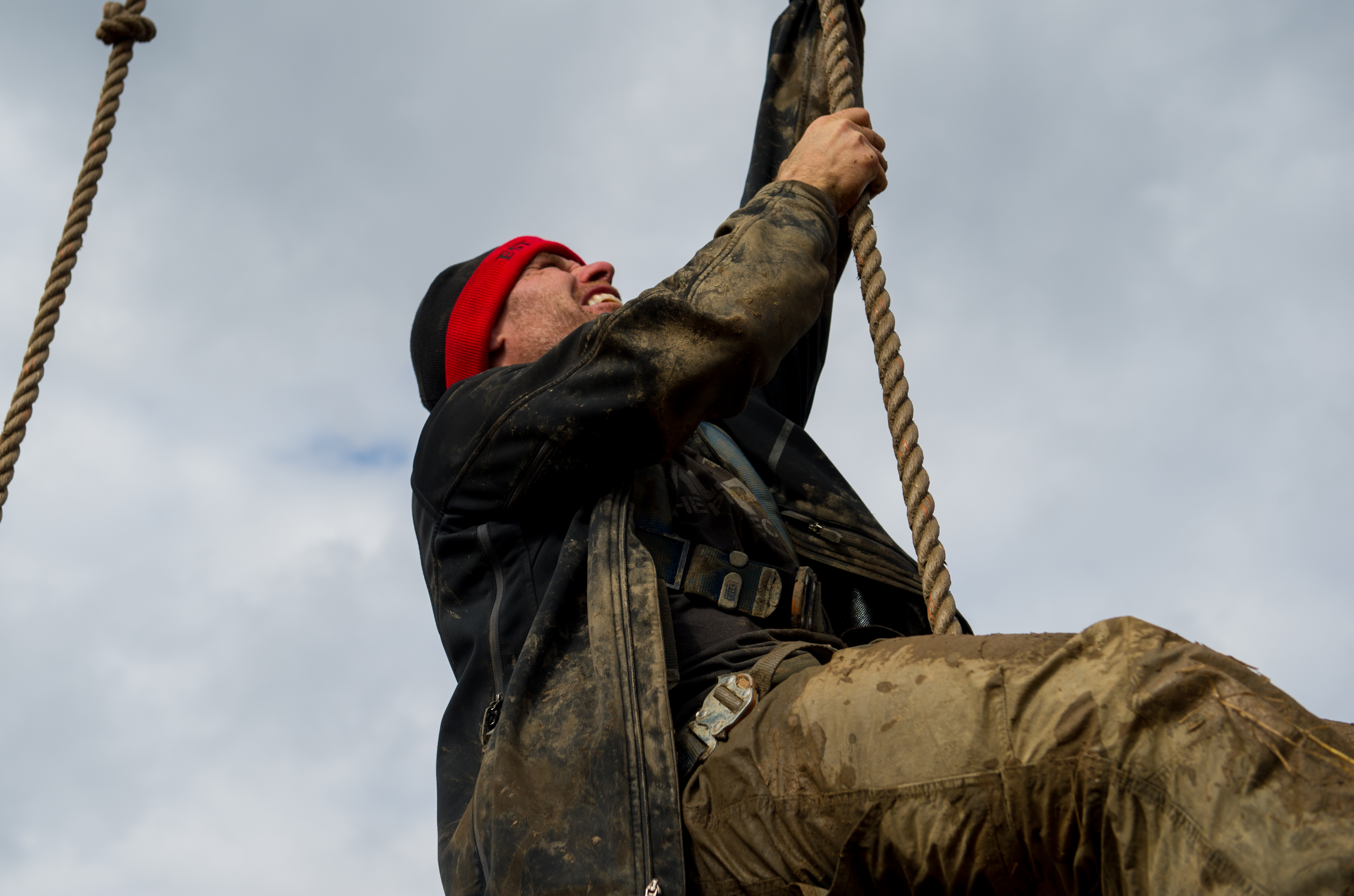 My wife had purchased the South Carolina Beast as a “Welcome Home” present from my last deployment, and I insisted that she join me. I mean, “let’s be fair,” if my wife is going to believe that a 13 mile “suck fest” is a great welcome home gift, she just had to join me. Especially considering, at the time, she was a little high maintenance, and completely against getting muddy in any way. Don’t get me wrong, my wife has always been a bad ass who loved to work out, but I never saw Obstacle Course Racing in her future. So, we ran the Beast together, and it was a lot of fun. We even met a ton of cool people, but my ego still convinced me it really wasn’t “all that.” I thought that this would be one of those memories you look back on and laugh, but something we would never do again. I couldn’t have been further from the truth. Everything changed on that cool October afternoon.

Now, let me fast forward two years and 15 races later. I have never run another Spartan, and the 15 races I’m talking about were run by my wife. The once high maintenance woman that hated the idea of getting muddy was now racing every chance she had. The wife, who I thought would never race again, now had legitimate physical and emotional withdrawal symptoms when she wasn’t prepping for a weekend filled with racing and crazy friends. I, on the other hand, have had the personal enjoyment of spending quality time with my two boys. I have been serving as Daddy Day Care and a loyal supporter of her and the multiple teams she has run with (WOR, Dirtbags, OEW – Operation Enduring Warrior, etc.). Over the past two years I have observed the growth of my wife. I have seen her focused determination, physical ability, and self confidence all grow exponentially. This past weekend, though, was the true eye-opening experience. 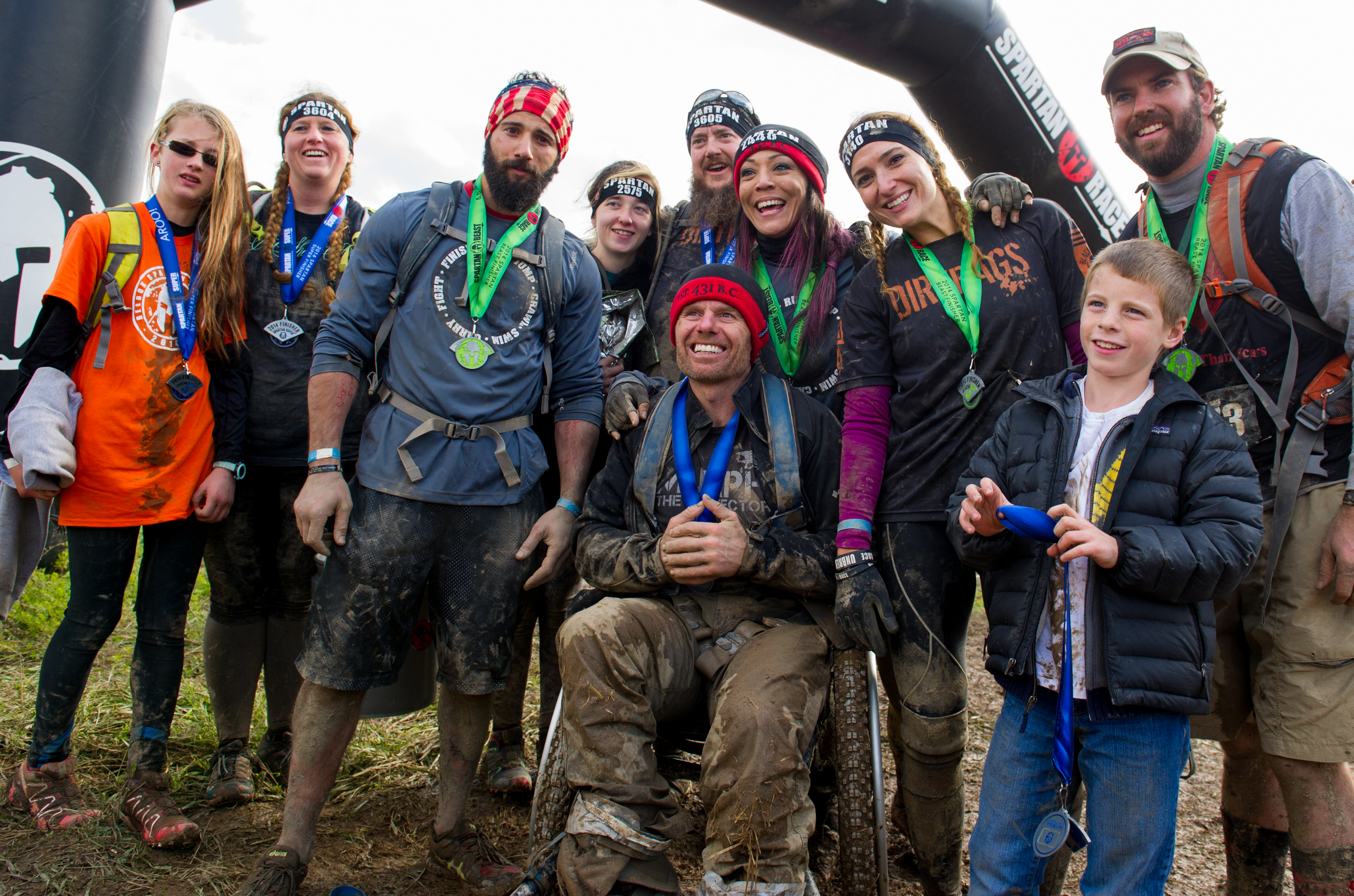 Michael Mills (Spartan Race Pro Adaptive Athlete) had challenged Joe De Sena to race a Spartan Super. The only rule was Joe had to complete the race the same way Michael would. Michael, you see, is a paraplegic (due to a drunk driver when he was only 16) who races in a wheelchair. Joe agreed to the rules and accepted the challenge. When I showed up to the race I had some vision in my head of Joe being White Goodman (Ben Stiller) from Dodgeball. I figured Michael Mills would have his group of “Dirtbags” and Joe would have eight or so “Purple Cobra” ringers (300 pound muscle men ready to carry him on a chariot for 10 miles). I will confess now, that I feel quite embarrassed with my assumptions.

Joe had actually shown up to the race with just himself and a wheelchair. Michael Mills decided to split his team up, so that both could have assistance (as necessary). Trust me, both Michael and Joe are bad ass, but gravity is gravity. The hills at Spartan Race are friendlier to gravity then they are to wheelchairs, and both Michael and Joe were going to need help over areas of the track and some of the obstacles. During the race I watched my wife perform like a Beast. She, along with her teammates, pushed, pulled, and at times dragged their wheelchair-bound teammate over the 10 plus mile course. I was also able (for the first time) to view Joe as himself, and not some preconceived character I had made him into. Joe was humble, funny, motivating, and above all kind to everyone on both teams and other racers on the course. I realized he is just like men I have respect for.

In these two years, and especially on Saturday, I learned so much about Joe De Sena, Spartan Race, my wife, and myself. I learned that Joe is not your “run of the mill” CEO trying to make a buck. He is an athlete first, who generally cares about every participant at every race. He is a humble gentleman with a warrior’s spirit. He wants “Spartans” to push themselves at every race, test their limits, and find the drive that pushes them to be better. “This is Spartan Race not Spartan Walk.” I also know that Spartan Race really changes lives. It changed my wife’s, my boys’, and my own.  My boys see their mom as a “Spartan Chick” and even more of a “bad ass.” Our oldest son has already begun his racing career, and the youngest is chomping at the bit. Every race I see hundreds of things that can only be experienced at a Spartan. There is nowhere in the world, and especially the “fitness” world, where people are more encouraged then on a Spartan course. No one is teased or taunted, and every Spartan is actually there to ensure every racer finishes. I now know, and am willing to admit that Joe De Sena is a true pioneer, and has created something incredibly unique. Spartan Race would not and could not be the same with a different founder.

If you are still on the fence about running a race, then there is only one thing left to do… experience it for yourself. Sign up for a race, show up early, and enjoy the day. It will change your life!